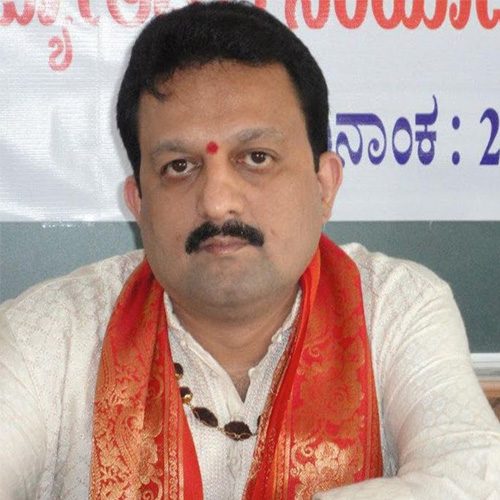 Shri. Shankar G. Hegde is an internationally renowned astrologer with an experience of predicting on more than 38 thousand horoscopes as he learnt astrology, mantra vidya& palmistry at a very young age of just 14 years. Though he was a science student & good sport person, martial artist during his college days , he was more interested in occultism. So he could give many super hit predictions well in advance which can be seen in Super Hit Predictions section.

Around his 24th year of age he took astrology as a serious subject & also started earning & learning by taking astrology as a profession in Mumbai a best city where anybody can learn different styles of leading the life.

In 1999 he shifted to Bangalore & many VVIP people like former Prime Minister Sh. H.D.DeveGowda admired his knowledge. Some of them mainly DeveGowdaji attended his marriage in 2000 also. In the same year he got an opportunity to give TV programs on a regular basis as the 2nd astrologer of Karnataka & mostly one of the 1st 25 astrologers of India.

Mr. Shankar Hegde is co-author of e-books LagnaVarahi&Shri Shiva GouriJataka. He has translated World Famous Astrologer Shri. K.N.Raoji’s Predicting through JaiminiCharaDasha to Kannada. He attended world conference on mundane astrology in October 2010 as a delegate. Sh. K.N.Raoji has published his many articles in Journal of Astrology magazine & website which are world class magazines & website. His another website www.epanditji.in has followers from more than 120 countries.

He has visited many a countries to teach advanced methods of astrology. He has produced many researches on social forums. His predictions are free for poor & needy people but that will be decided by him after interacting with the required person.